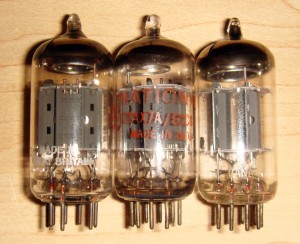 Recently I got curious about a sound of tubes produced based on the same technology and in some cases the same equipment, but in different places. One of the reviews was dedicated to EI 12ax7 produced on Telefunken’s equipment and the results were not equal at all.

This time I looked at Mullard’s 12ax7 production from UK, India & Canada. Now the process was supposed to be controlled by Mullard and technology should nave been used the same, so the results should be very similar – they are not.

So how do you not get yourself to a wrong country when traveling The Land of Tubes? Lookf for this sings of the real thing:

Other things like grid posts – I’ve seen Mullard with Copper & Metal posts. It looks like later production switched to other material away from Copper, but I’ve never seen Indian or Canadian tubes with Copper posts.

Japanese produced Mullards could be destinguished by the same signs as well. Don’t rely only on one sign, use multiple.

Hope that helps to find the real thing.