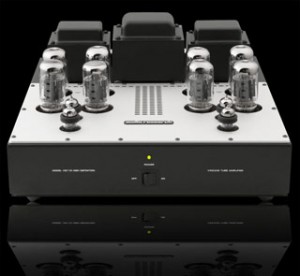 WOW!!! This is a beast of a machine. Size wise, it’s about two times bigger than McIntosh 275, but that’s where the superiority ends.

It’s hard to compare new amplifiers directly from manufacturers with a fine tuned machine like my MC, but compare I must. I’ve been waiting to review this amp for quite some time – about 2 months and finally the store loaner has arrived. Good looking machine, but very contemporary. Very wide base with 3 huge transformers without any enclosure. The whole thing looks very menacing, but in no way elegant.

This amp uses eight 6550 tubes and two 6H30. 6550 is a great tube and could be rolled with many NOS tubes and many new production tubes to get the the sound that a user desires, but I question the choice of 6H30. This is a Russian tube with no NOS options outside of old USSR stock and new EH tubes – this practically eliminates tube rolling as an options – no rolling, no fine tuning. A lot of tube amp manufacturers despise the fact that users replace the tubes that the amp came with claiming that manufacturers know which tubes work the best in an amp. This is BS. First of all, if we wanted a preset sound from a factory, we would by SS amps. Secondly, manufacturers can’t buy great NOS tubes in quantities that would allow them to include the tubes in the amp. Finally, How the hell do they know what kind of sound I like?!?! Just to give you an example, when I purchased my MC 275, I almost returned it because the sound was extremely dry and lifeless. Good thing that I didn’t do it and I had a set of Telefunkens to replace all small tubes in the amp – what a difference it made! The amp came alive – it opened up like a beautiful flower. Well, with AR 115, there is no such luck. If you don’t like the sound – you are stuck. Rolling output tubes only gives you a very marginal control of the sound.

Now about the sound of AR 115. I stopped by in the store and brought with me my reference CD. The room was larger than the room I usually listen to, but the great thing was that the amp was connected to the same speakers – Vienna Acoustics Beethovens – which is what I have as well. I started to play the first song, “Cry me a River” by Nicki Parrott and immediately realized that something is very wrong. This song, when played on my system, had a fantastic sound stage, but on AR 115 all of that collapsed into the middle. I could clearly hear when instruments were playing in a specific speakers – a thing that I don’t remember hearing last time – since with MC the speakers just dissolve leaving only music in my room.

Next was Keb’ Mo’ with “Momma, Where’s My Daddy”. There was unnaturalness about Keb’s voice. I just couldn’t imagine him being in the room. Also, a lot of nuances of his voice and guitar play completely disappeared.

Another test was in order, the one that really shows how the system works when it comes to the sharp spikes in sound. I played “Silence” by Joel Xavier & Ron Carter. This is one area where MC with factory tubes was absolutely horrific and lo and behold, AR 115 did the same thing. Sound of the bass guitar was muddy and undefined. Acoustic guitar sounded superbly sharp to the point of a pain in my ears.

By the end of the test, the only desire I had was to stop listening and to leave the room. I didn’t give up right away – I listened to 5 more tracks from Kari Bremnes to Yoshiko Kishino’s Orchestra. All of the tracks were reproduced by the amp with the same results. Very narrow sound stage, absence of sweetness in HF and lifeless mid-range. I was under suspicion that part of the problem might have been the fact that the tubes didn’t burn in, but at the store they promised me that the amp had good time on the tubes.

So the conclusion, this amp in its stock configuration sounded like shit, but so did McIntosh 275, so are the majority of the tube amps that I tried with the stock tubes, but what separates many other tube amps from AR 115 is that they have a huge number of choices when it comes to tube rolling. You just can’t compare AR 115 with stock Russian tubes to McIntosh 275 with a full set of Telefunken or Sylvania Gold Brand.