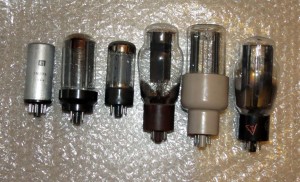 Some of you might have been asking the same questions as I did – Does tube rectifier change sound? How effect does it have on a sound?

To test this, I put together an amp that takes 5U4 rectifier, but could be easily be replaced with 5Y3, 5Z3, 5AR4 and of course solid state rectifier.

Ones and for all, I proved to myself at lest that RECTIFIERS DO CHANGE SOUND! Keep in mind that I was one of the biggest doubters.

It appears that the main reason, but not the only one, is voltage drop for different rectifiers, so your amp works at different operating point; thus, sound changes.

5U4G (44v drop) has a smaller voltage drop compared to 5U4GB (50v drop), so you amp is running at higher voltage. But the effects on the sound is that the amp sounds softer – the sharpness on the top is less audible.

5AR4 rectifier (17v drop), Mullard especially, has one of the smallest drops in voltage, which lead to tighter sound, but also more transparency and more speed, but warmth was sacrificed – with type 45 and 2A3 tubes that was not a desired effect.

How do different manufacturers affect sound? I couldn’t hear any difference from different brands of the same type of the tube. GE vs RCA – same results.

Solid Stage rectifier changed sound quite a lot making it much sharper on the top, the desired tubiness decreased.

So there you go. Different circuits will behave differently with different rectifiers, but you will likely hear a change

4 thoughts on “The Sound of Rectifier”