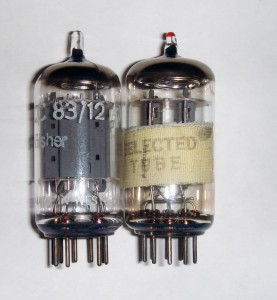 I was always very skeptical about selected tubes. I mean, how much different could it be from the non selected tube from a reputable manufacturer (we are not talking about Chinese tubes here). I got 4 Telefunken 12ax7 Selected Tubes when I purchased my McIntosh 275. I plugged then in, and they sounded very nice. Then I looked up the price of the tubes and they were going for $225 each!!! “This is crazy” I thought. How can a tube cost so much compared to the non-selected version that you can buy for ~$40 on a good day. Given that these were NOS and everything, but come on. So I put them away. Later on I decided to sell them – $900 is a lot of money for 4 small tubes.

I put them up on ebay, got a few offers, but there were coming at around $500-600. Obviously I didn’t except them. One of the offers came from Brent Jessee from AudioTubes.com and I was quite embraced when, without realizing who the offer was from, I started to explain to him that these are selects and they are going for a lot of money 🙂

One day I decided to listen to them again. I just moded my headphone amp to support 12ax7 tubes and started to roll through them again. I put the tube in and listened to Patricia Kaas. When music came to a track called Mon Piano Rouge, I was floored by the amount of air and the soundstage. It was just unbelievable. Each note had had such a magical decay quality to it that it completely transformed the track. I decided that all Telefunkens would sound the same, so I plugged in the regular Smooth plate – and lo and behold, the sound was so much flatter compared to Selected tubes. I started to listen to other tracks that I usually use for evaluation and with the same results in all the cases. The amount of air and 3d quality of the music was significantly better with Selected.